Tostig has finally found someone that will listen to him, listen to whatever tales he can tell and what tales they are.

He has convinced Harald Hardrada of Norway that England is ripe for the picking. Harold is down on the South Coast waiting for an expected invasion by Duke William of Normandy and the north lies unprotected.

“By the time that William invades England we shall control Northumbria and Mercia, re-taking the old Viking north” he whispers in Hardrada’s ear.

“Imagine, your Norse warriors striking fear into the North-East again, just like the old days. We can sail down the coast, sacking, looting and pillaging and be in York inside three weeks. Such riches, such wealth, such land and all yours for the taking.

You will become ‘the chosen one’ sweeping all before you.

There will be renewed pride in your fierce history. It will be the year to end all years, the war to end all wars.

We could crown you King by the end of the year.”

It is Tostig’s treachery and promises of easy pickings that persuades King Harald III Hardrada of Norway to invade England.

His pitch is now to throw himself behind Hardrada’s claim to the throne just to spite his brother Harold.

If Tostig cannot have the throne he will try to stop Harold Godwinson’s reign at any cost but be warned, if things do not go well for Hardrada, Tostig and Copsig will switch sides at the drop of a hat.

For the full report behind these headlines, read 1066 The Saxon Times and experience the Norman Conquest through the eyes of the Saxon Times reporters.

For more information and to LOOK INSIDE visit: The Saxon Times

It has been announced with great regret that King Edward, known as ‘The Confessor’, died peacefully in his sleep this morning. He served his country well. Tomorrow will be a national day of mourning. It is expected that his funeral service will take place tomorrow in West Minster Abbey.

I hope that I am not speaking out of turn but I have grave doubts about the future of our beloved England. Will the King’s childlessness ultimately lead to conflict? Will we have the strength and power to resist invasion from William, from Hardrada or from both?

At The Witan Today By Our Political Correspondent Cenred of Ely

Today the Witan, was assembled to discuss the succession. With little hesitation or deliberation, they confirmed the identity of the new King of England.

On this day of Epiphany and with great ceremony before all the assembled nobles, King Harold II was crowned King of England, by Archbishop Stigand. The multitude’s former sombre mood was replaced with great rejoicing, fires were lit and there was singing and dancing that looked as if it would continue far into the night. 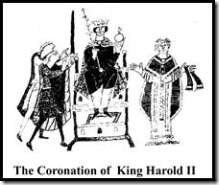