THERE’S MORE TO 1066 THAN THE BATTLE OF HASTINGS

For more information on The Saxon Times and to LOOK INSIDE visit: www.1066thesaxontimes.com

The recipes in The Saxon Times are the result of research from a variety of sources. They are meant to be a representative menu of the food served to Duke William of Normandy and are for information only. No cooking times, temperatures, weights or measures have been given on purpose. Recipes taken from The Saxon Times and prepared by you are done so ‘at your own risk’. The Saxon Times and David Clarke are not responsible for any damage, medically or otherwise, resulting in the preparation of food using the instructions or recipes provided.

More than just footsteps on a path.

Old talks and new talks, my History Talk’s List has been updated for 2020 and you can Look Inside at www.pubhtml5.com/uslz/vmdb

The Talk List has brief details of each talk but there is more detailed information on the History Talks website at www.1066haroldsway.co.uk/talks

Of course, you can contact me by e-mail or telephone for even more information.

All the new talks are also being added to my listings on Speaker Net, Public Speakers Corner and the Medway Speaker’s List.

Grave news from the Battlefield at Senlac Ridge 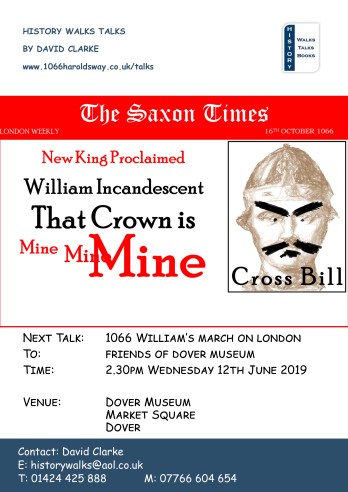 THIS COUNTRY NEEDS YOU

Reading a prepared statement from the steps of West Minster Palace, King Harold II has this to say to the Nobility of England.

“There is now no doubt as to Duke William’s intentions against our Island State. England is set to face its darkest hour since the Viking Invasions and we must be prepared.

We know that we have right on our side and our belief in God’s will, will not waver.

This will be a fight to preserve the very democracy that we hold dear and every Englishman should be ready to fight.

I now call you all to arms. The battle may be tomorrow, next month or the month after that and it will be fierce but be assured, we will all stand side by side in the defence of the realm.

It is God’s Will”

On April 1st, 1066, King Harold II took action in defence of the Realm and summoned the ‘Fyrd’ to watch over the coasts. There are watch posts all along the south coast from Bosham to Dover. The Fyrd is the Anglo-Saxon militia and is made up of men drawn from the farms, villages and towns of southern England.

HAS THE FYRD BEEN SUMMONED TO EARLY?

The ‘Summoning of the Fyrd’ seems to be at odds with the intelligence received recently from Normandy. Duke William’s preparations have only just begun and it is unlikely that all the ships required for the invasion will be completed for another two months at least.

Of course, there is always that loose cannon Tostig to think about but he has little support in Wessex and there is little to suggest that he has the money, power or men to mount a serious invasion attempt.

It may be a calculated show of strength by the King causing William, and his nobles, second thoughts about invading our England.

Let’s just hope that the Fyrd do prove to be an effective defence.