Clearly the King expected an invasion during the regular fighting season. The King’s forces are all trained and ready but there is no sight of any ships from Normandy. What is Duke William playing at?

THERE’S MORE TO 1066 THAN THE BATTLE OF HASTINGS 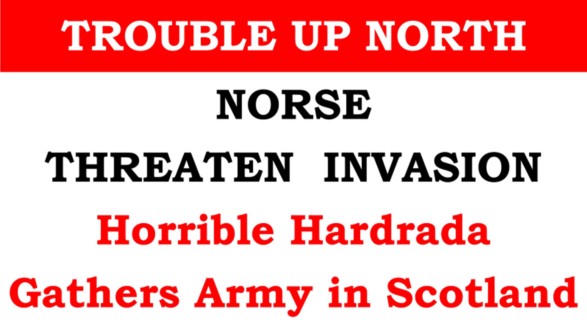 Harald Hardrada calls to arms his Viking brothers and embarks from the Isle of Solund. His invasion fleet consists of 300 warships and about 12000 men. It is a formidable force and prides itself on its fierce history.

16th August and Hardrada reaches the Shetland Islands. There is ‘overlord business’ to take care of as befitting a colony of Norway and the stay on Shetland is prolonged for a few days. The men use the time for a little rest and recreation in the true Viking way and there are a few battered and weary bodies when the call comes to embark ship for the next journey.

By the end of the week, they reach the Orkney Islands, another Norwegian protectorate.

To cement his position as King and to seal the alliance, Hardrada betroths his daughters to the brothers Paul Thorfinnsson and Erland Thorfinnsson who jointly rule the Isles as Earls of Orkney.

It is no coincidence that the Earls ‘agree’ to provide reinforcements for the Norse army and they sail to Scotland with Hardrada at the end of August.

VIKING FEAST FIT FOR A KING

A horse was sacrificed to the old Gods, spitted and roasted until it fell off the bone. Salt fish and pork and goat added courses to the feast with plenty of fresh heavy bred to mop up the grease and gravy.

Some would use the bred as a plate, rather than the wooden bowls laid out for Hardrada, and their fingers instead of the sharp knives and spoons – made from wood, horn or animal bone. For the King they had been carved and decorated in the form of a dragon.

For the lesser tables, there was stew from the great iron cauldron over the fire. The stew, of boiled lamb bones, beans, peas, carrots, turnips and whatever else could be found, had been simmering for the last few days. The smoke from this fire and the one for the spit, roasting the horse, left the great long hall full of smoke.

A thin layer of fat has formed over the stew that softens the bred and which the men seem to enjoy although there is little appetite for the fresh fruit and the honey on buttered bred.

There is beer and more beer but Hardrada seems to prefer his mead made from the local honey and drunk from a silvered and decorated animal horn. The men get louder, the more they drink and soon start to sing the old Norse songs before falling asleep on the floor of the Great Hall.

Tostig has finally found someone that will listen to him, listen to whatever tales he can tell and what tales they are.

He has convinced Harald Hardrada of Norway that England is ripe for the picking. Harold is down on the South Coast waiting for an expected invasion by Duke William of Normandy and the north lies unprotected.

“By the time that William invades England we shall control Northumbria and Mercia, re-taking the old Viking north” he whispers in Hardrada’s ear.

“Imagine, your Norse warriors striking fear into the North-East again, just like the old days. We can sail down the coast, sacking, looting and pillaging and be in York inside three weeks. Such riches, such wealth, such land and all yours for the taking.

You will become ‘the chosen one’ sweeping all before you.

There will be renewed pride in your fierce history. It will be the year to end all years, the war to end all wars.

We could crown you King by the end of the year.”

It is Tostig’s treachery and promises of easy pickings that persuades King Harald III Hardrada of Norway to invade England.

His pitch is now to throw himself behind Hardrada’s claim to the throne just to spite his brother Harold.

If Tostig cannot have the throne he will try to stop Harold Godwinson’s reign at any cost but be warned, if things do not go well for Hardrada, Tostig and Copsig will switch sides at the drop of a hat.

For the full report behind these headlines, read 1066 The Saxon Times and experience the Norman Conquest through the eyes of the Saxon Times reporters.

For more information and to LOOK INSIDE visit: The Saxon Times 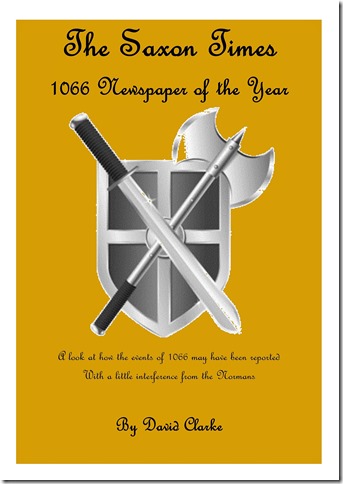 Anglo-Saxon England and the Norman Conquest, 1060-66

The Saxon Times looks at how the events of 1066 may have been reported by an English newspaper and takes a chronological, topical and contemporary view of the tumultuous events that surround the Norman Conquest of England as they unfolded and appeared to its readers through the ‘eye-witnesses’ reports of the Saxon Times reporters.

By the time of the Norman Conquest, England had been Anglo-Saxon for 600 years but the death of King Edward the Confessor (1042–66) and the subsequent events that led to the Battle of Hastings changed England forever.

When King Edward the Confessor died in January 1066 nobody could have foreseen the year of bloodshed and mayhem that would take place. Everything seemed settled and peaceful.

England had developed a strong government, a prosperous economy and extensive trade links across the North Sea and the Channel.

A strict social system was headed by the aristocracy with most Anglo-Saxons ‘peasant farmers’, who in return for protection from a lord, owed him service such as military service in return for land to farm.

This military service had created a militia ‘the fyrd’ for defence of the realm which had finally provided some peace from Viking invasion and was one of the reasons that England had such a well-organised government.

The succession crisis of 1066, following the death of King Edward the Confessor meant that once again greedy, envious foreign eyes were being cast toward England.

Invasion was not far off.

The Saxon times is available from all good bookshops, the internet, Amazon

· Why other people also claimed the throne of England

· What happened in 1066: the year of the Norman invasion.

The Saxon Times aims to:

· Inspire curiosity to know more about the past

· Increase knowledge of and understanding about 1066

· Understand how people’s lives have shaped the nation

The Saxon Times will:

· Identify the significant events of 1066 in chronological order