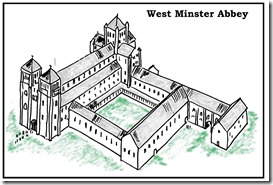 Eadgar Of West Minster, The Saxon Times Court Correspondent, takes a look at back at some of the headlines at the start of what has been a tumultuous New Year.

West Minster Abbey set for Consecration but what should have been a Glorious Day was tinged with sadness.

The crowds that lined the streets, around the new Abbey and the Royal Palace on what should have been a day of great rejoicing, were much subdued.

King Edward, known and loved throughout the land as ‘The Confessor’, did not attend the ceremony. We understand, from a Court bulletin, that the King’s health had been failing for some time and yesterday he was too ill to walk the short distance from the Royal Palace. Inside sources close to the King appear to be greatly concerned and some believe that the King may not have long to live.

Militarily, he has had to rely on Wessex to maintain power but we have all enjoyed the benefit of comparative peace in our time. His death will create a power vacuum unless a strong leader steps forward to become King.

Sources close to the King indicate that there are three candidates who all believe that they have the right of accession and a valid claim to the throne.

As the King grows weaker by the day, and without an heir to succeed him, the achievements of Harold Godwinson cannot be overlooked.

His successes in the defence of the Realm have raised him to a position of such eminence that only his deficiency of royal blood can stand between him and the throne.

It Is A Death Wish

A Court Bulletin confirms the continued concern for the health of King Edward the Confessor. His wife Edith, who is Harold Godwinson’s sister, and Harold Godwinson have both been constant at his bedside.

According to those close to Harold, King Edward spoke to Earl Godwinson of his fears for the future and said; “I commend my wife and all my kingdom to your care”.

There has been no formal confirmation from the Palace to confirm or deny this statement but it is quite possible that it will influence the Witan in their decision as to the succession.

The Struggle for England